An homage and tribute to David Bowie and his work, as well as an introductory listening guide to his bountiful discography:


Bowie will always be there - woven within the fabric of rock n' roll music and greater pop culture ever since the 60s. Even if you haven't heard him, you've heard him - or at least his direct and indirect influence. Within the last few years I fancied myself a soft Bowie fan, adoring albums like Low, Ziggy Stardust and the Spiders from Mars, and singles like "Space Oddity." I had heard many of his greatest works, but not nearly enough, I’d quickly come to find. I’ve always enjoyed his take on rock music, peppered with glam rock, and eventually heavy synthetic tendencies - having a consistently keen interest in fully-fledged, multi-faceted artistic indulgences. Within the last few months, my opinion of David Bowie has gone from great rocker to GoaT-tier songwriter, as his passing has acted as a stepping stone for my own musical education – the deep descent down The Thin White Duke’s illustrious discography.

So in 2016, I thought Bowie was essentially done. He was out of his prime (assumedly, and foolishly, I might add), with his best work behind him. I hadn’t heard any of his stuff post-80s, and I hadn’t planned on it anytime soon. This all changed shortly after Bowie’s death, which closely followed the release of his final album Blackstar earlier this year (2016). In pure nostalgic fashion, I proceeded to pick up Blackstar, as I had heard pretty good things, and used that as a stepping stone in approaching his other works I had previously (sadly) missed out upon.

I think Anthony Fantano said it best – it’s like Bowie turned his death into an art project. Bowie’s deathbed album, Blackstar, the product of a dying 68 year-old (and soon to be 69) staring through the black eyes of death’s certain embrace, further cemented the mythos surrounding Ziggy aka The Thin White Duke aka Aladdin Sane. I was so particularly floored by Bowie’s artistry at such a late period in his life (literally dying) that I began to deeply crave more – what other mastery did Bowie have to offer that I hadn’t heard!? I soon set out to answer this burning question.

The next days and weeks were spent tearing through Bowie’s discography including those albums I had missed in earlier listens – Station to Station, Diamond Dogs, Scary Monsters, Aladdin Sane, and The Man Who Sold the World – as well as revisiting works I’d already heard like Low, Ziggy Stardust…, and Hunky Dory.

The following is an album tile of 9 of David Bowie’s greatest LPs, with accompanying descriptions, presented in chronological order (left to right, top to bottom). 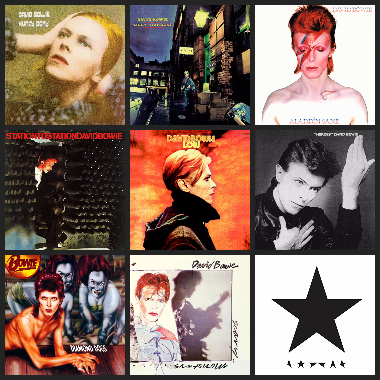 1. Hunky Dory – reminiscent of Bob Dylan here and there in Bowie’s charismatic, oftentimes kookier songwriting, Hunky Dory features heavy acoustic and singer-songwriter tendencies, while also being firmly shaped by glam rock, which defined much of Bowie’s career (and he actually pays homage to him in “Song for Bob Dylan”). This is a free-spirited, but tame David Bowie, and one full of many clever surprises. The album starts on a recognizable, kickass note with the famous "Changes", followed by the cheery "Oh! You Pretty Things." Songs like "Life on Mars," "Kooks," "Fill Your Heart," "The Bewlay Brothers" encapsulate the heart of this LP, establishing Hunk Dory as one of Bowie’s grand early achievements.

2. The Rise and Fall of Ziggy Stardust and The Spiders from Mars – Perhaps Bowie’s most recognizable and arguably (I don’t necessarily hold this view) greatest work. The album is based on Bowie’s persona of Ziggy Stardust and his rag-tag band of Space Spiders. Bowie impresses off the bat, with his popular "Five Years," a song of yearning and forced confinement, followed by the mellow, beautiful "Soul Love". The album begins to climax through songs like the timeless "Starman," which is, ultimately, one of Bowie’s most identifiable and representative works. "Lady Stardust" carries on the album’s infallible spirit, working as one of the more memorable tunes from the LP. "Ziggy Stardust" really caps off the album’s momentum, providing a portrait of Bowie’s alter ego, accompanied with colorful backstory. The album ends with the same rocking, folksy spirit that forms the spine of this LP – the high energy "Suffragette City" chugs forward, while the calmer "Rock n’ Roll Suicide" acts as the closer, touching on familiar themes of the rock n’ roll lifestyle and featuring stark horns and a fun, tight composition with strong Bowie vocals. This is Bowie at his absolute peak – a plateau he’d rest atop for the foreseeable decades.

4. Diamond Dogs – probably not his best work, by any means, but a great and welcome input within his broader discography. It also features some strange – but pretty cool – effects, including an unsettling voice-over to start the album, as well the vocal distortions on "Diamond Dogs" and the way the guitars and vocals play together on “Sweet Thing,” which forms the first of a killer 3-song arc coupled with “Candidate” and “Sweet Thing (Reprise)". Fuck, who doesn’t like "Rebel, Rebel." Additionally, “Rock n’ Roll with Me” and “Big Brother” both stand up with Bowie’s best works.

5. Station to Station – Perhaps one of David Bowie’s greatest achievements. Supposedly influenced by Kraftwerk’s Trans-Europa Express, Station to Station features rocking bluesy pieces among Bowie’s classic folksy lyricism and storytelling. I’d be doing the album a disservice by linking particular songs, especially since it’s only 6 songs long, but for those that want a taste…. “Station to Station” features the hubbub of traveling through Europe and harnesses a rocking, pacey second-half. “Golden Years” captivates with a rocking, pounding groove in typical bluesy-Bowie fashion. “Word on a Wing” may be one of my favorite Bowie songs – it’s brimming with genuine, heartfelt emotion … “in this age of grand illusion / you walked into my life out of my dreams.” This is Bowie at his poetic peak. "TVC15," conversely, contains another grooving, rocking tune with a deep, head-bobbing grind. The album ends on a gentler note with “Wild is the Wind”, featuring more poetry a la (credit to davidbowieaseveryone on tumblr).

6. "Heroes" – One of the 3 albums Bowie made with Brian Eno as part of the “Berlin Trilogy.” By this point, Bowie had embraced Eno’s synthetic material, incorporating it well within his own world. The title track, “Heroes” acts as one of the definitive, memorable pieces from the LP. "V-2 Schneider" provides some bumping, grooving funk before the album’s somber end opens. Eno’s influence is further felt in the soundscape and mood-building pieces that typify the back half of this work, such as "Sense of Doubt,""Moss Garden," and "Neukoln."

7. Low – Undoubtedly one of Bowie’s greatest achievements, and perhaps the best of the Berlin trilogy. Low showcases Bowie at the peak of his glam rock-turned-synthscape palette in this dense collage of moody, eclectic rock-synth tunes. Brian Eno, again, has his production and synth work all over this one. Low starts driving vehemently forward with zest, but mellows out in its latter half, where the primal synth swirls and world-building of Eno take firmer hold. Early songs such as “Speed of Life,” “Sound and Vision,” and “Always Crashing in the Same Car” present Bowie’s rock in a new, twisted light. I feel a great deal of nostalgia when I listen to this album, especially during songs like “A New Career in a New Town,” which seeks to capture the essence of change and that nervous excitement heading into uncharted territory. The album’s final 4 works, “Warszawa," "Art Decade," "Weeping Wall," and "Subterraneans" bring Eno to full fore, providing the basis for an otherworldly, immersive synthetic experience – a remarkable, memorable close to Low.

8. Scary Monsters (and Super Freaks) – One of Bowie’s definitive 80s albums. Pop-like anthems such as “Up the Hill Backwards," provide head-bobbing, sing-along lyricism against a hard rock exterior. “Ashes to Ashes,” is one of Bowie’s greatest songs, featuring super creepy synths draped against a driving beat. I cited the music video, a wonderfully wacky trip, in itself. The quality of the piece’s lyricism is classic, especially as the chorus hits, with Bowie reflecting on himself (most notably, drug abuse) and his music’s influence - “Ashes to ashes / funk to funky / we know Major Tom’s a junky…” The song “Teenage Wildlife” is also a worthy highlight with intricate guitar and climactic, energetic builds featuring Bowie at full bombast and life. Ultimately, Scary Monsters is one of Bowie’s most exciting, reflective, and pulsing works.

9. Blackstar – And last, but certainly not least, David Bowie’s swan song. Hip-hop, deeper British electronic influences, and jazz, as well as Bowie’s typical rock roots, come to fore throughout Blackstar. All in all, Blackstar is classic Bowie. His raggedy, aging voice works well over the oftentimes brooding and dark heart of Blackstar. The album starts with “Blackstar,” featuring a music video that explicitly alludes to death, featuring striking imagery including naked skulls and Bowie's own artificial eyes. The music video for “Lazarus” is particularly representative of his mindset at the time, featuring footage of an ill, weathered Bowie in an isolated, painfully white hospital bedroom-deathbed setting. The song itself explicitly alludes to Bowie’s inevitable death and acts as a perfect representation of Bowie’s latest sound - a mish-mash of atmospheric rock, jazz, and grooving beats with raggedy, rock/folk-like vocals.

"Sue" acts as another wonderful package of these influences, forming a dense, brisk, deeply brooding amalgamation. Some of the vocals take on the characteristics of chant and even drone at times, paying heed to an imminent morbidity. Some of the album’s instrumentation is reminiscent of the dark jazz of composers such as Angelo Badalementi (shameless, but necessary Fire Walk with Me plug).

"I Can’t Give Everything Away" posits a fitting, poetic parting piece. On the last song of the LP, Bowie utilizes a nostalgic harmonica incredibly reminiscent of "A New Career in a New Town" from Low. The saxophone makes its way back onto this final track, a staple in his newest work, while the harmonica reminisces on the places he’s been. Ultimately, I think Blackstar acts as a transcendent goodbye from the British rocker, despite the fact that he had so much more to give – a bittersweet and final reminder of the generational genius that was – and will forever be – David Bowie.

I’ve always deeply admired Bowie’s eclectic style and limitless imagination – I firmly believe he has one of the most extensive, relevant, and musically complete discographies in modern music. I’d go so far as to say that he is easily one of the GOATs of the mid-late-20th century to the present. His discography is chock-full of incredible content that spans decades. I mean the man was able to fucking drop an album-of-the-year-worthy LP on his death bed at the ripe age of 69. To add more to the myth: he had anisocoria, a condition that left Bowie with different sized pupils. And on top of that, his eyes were literally . As many have stated elsewhere – the man made being weird fucking cool. And there’s too much talent riddled across his long, fertile career to simply ignore. Bowie’s discography is insane in that the ratio of great music to music produced holds extremely well compared to other artists of the last 50 years. Bowie’s notable collaborations with Brian Eno and Queen, among others, are also worthy of high praise.

Bowie’s meant a hell of a lot to me in recent years, expanding my knowledge of music and the limitless possibilities the art form has to offer. He was a truly unique, cutting-edge innovator. Rest in peace you crazy, kooky, beautiful deity of a man. Just like that bluebird, I know that you’re free.