The following album tile conglomerate depicts 12 of Brian Eno’s greatest records, chronologically. The following analysis expounds upon and celebrates his most prolific works. 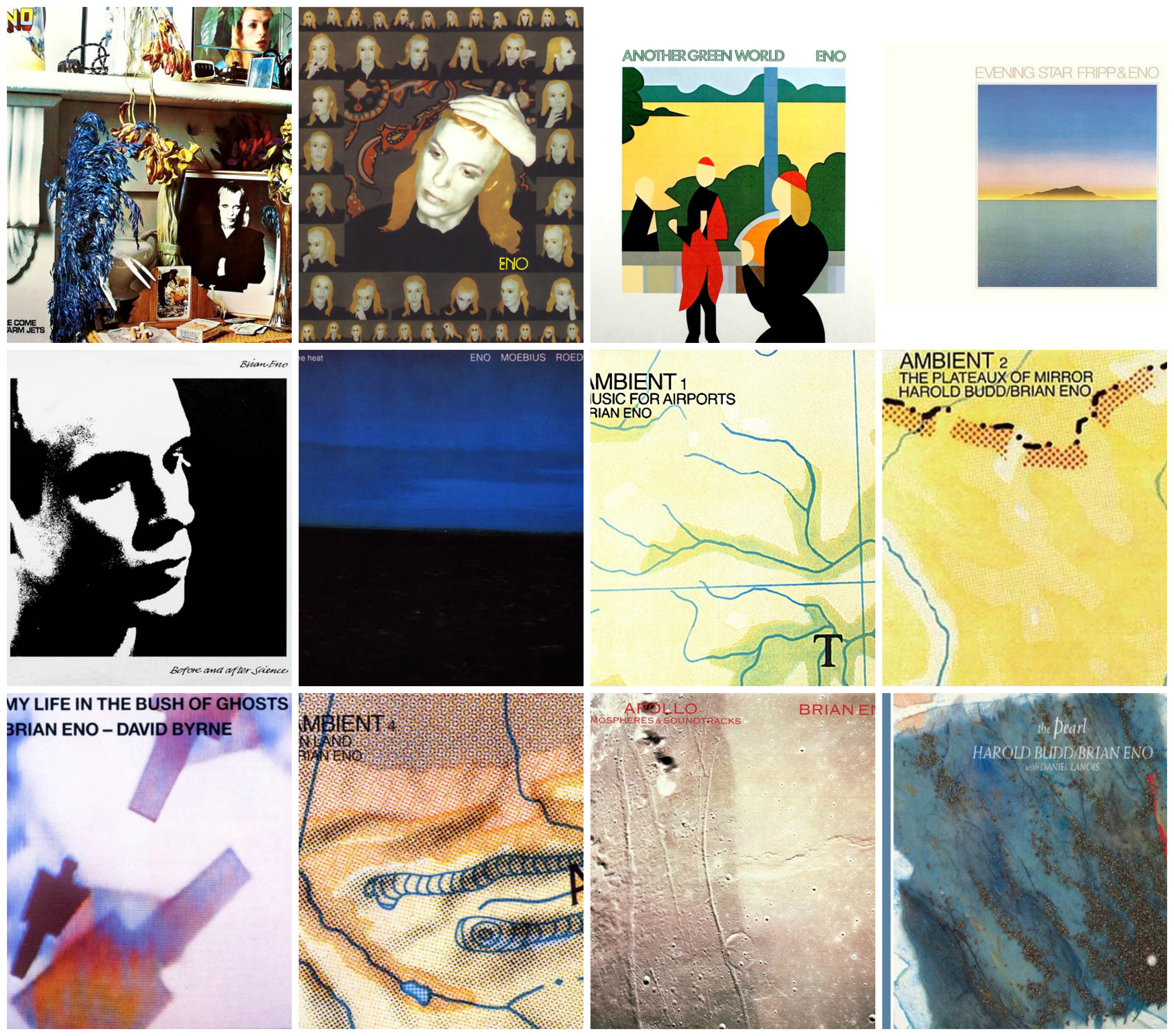 Creating originally in glam rock, Brian Eno (legally Brian Peter George St John le Baptiste de la Salle Eno) laid the fertile seeds for ambient music as his music career progressed, but not without leaving an imprint on the greater rock n' roll and popular music realm. His early career is noted for its eclectic, oftentimes "whacky" and progressive arrangement of rock-based and synthetic sounds. Noteworthy collaborations with David Byrne, David Bowie, and Talking Heads, among many others, and an extensive, high-quality discography have garnered him an almost mythical reputation. His undeniably profound influence on modern music deserves extreme praise and recognition, impacting future generations of sound - from electronic music to film scores.

His oft-acclaimed ambient works spawned predominately after the year 1975, but were preceded by unique gems like Here Come the Warm Jets and Taking Tiger Mountain (By Strategy). 1975 marked a hallmark epoch in the producer/composer's career releasing arguably his magnum opus in Another Green World and his first fully-fledged ambient album, Discrete Music (not depicted here). Many of his keystone works after 1975 are more or less deeply ingrained in ambient soundscapes and atmospheres. The brilliant Before and After Science LP epitomizes the transition of Eno's musical progression, featuring strikingly eclectic rock pieces and brooding, contemplative ambient works on the back half.

If you’re just starting out with Eno, I’d recommend hitting his earlier works first, not only because he starts off hitting anyway, but because his earlier works set the building blocks for his future, furthered sonic success. The cream of the crop of his mid-early works, I’d argue, manifest in Before and After Science and Another Green World, showcasing Eno at his most unique – at the precipice of his transition from eclectic glam rock songs to moody, immersive ambient works.

If you’re specifically trying to delve into his ambient works, try anything during/post 1975 – essentially Another Green World and onwards, with the exception of My Life in the Bush of Ghosts, which actually significantly altered the use of sampling as an art form, yet far from an ambient work. Eno’s ambient works are pronounced by immersive bodies of lush, brooding synth textures and mastery of subtlety. I've heard a decent amount of ambient music, and not only have they been obviously incalculably influenced and shaped by Brian Eno's work, but there are few that hold a candle to the master's. I’m particularly fond of After the Heat, Ambient 1, Ambient 2, Apollo: Atmospheres & Soundtracks, Ambient 4, and The Pearl.

Brian Eno is an audio-wizard - a technician and student of the game; an unmatched crafter of moods and soundscapes. He's undoubtedly influenced (whether directly or indirectly) modern electronic giants such as Burial, Aphex Twin, and even Animal Collective. This Pitchfork interview with him even suggests that Prince and Public Enemy were influenced by his work. Even Frank Ocean recently cited Brian Eno as an inspiration for some of the work on Blond. I hold Brian Eno to the highest musical standard, and he sits near the top of the most influential and gifted modern artists.